We are on the doorstep of Christmas1. The day is almost here. Out of all the Christmas gifts in your life this year, are you more likely to be the giver of the gift, or the recipient of the gift?

You really need both parts to have a gift. In the next few days there will be a lot of gifts given and a lot of gifts received. There are classroom parties in school, work parties with gift exchanges, in addition to all the family get-togethers and dinners and opportunities to open presents and enjoy giving and receiving gifts with ones we love.

But which one is better? Giving a gift or receiving a gift? Jesus himself, you might remember, gave us an answer to that question. It’s recorded for us in the book of Acts: The Lord Jesus himself said: ‘It is more blessed to give than to receive.’ (Acts 20:35) So, there you have it, if Jesus himself has weighed in on the question, it’s been answered.

But wait a minute. I’m not trying to disagree with Jesus in any way, but that quote where Jesus said it’s more blessed to give than to receive is in the context of helping the needy. It’s the Apostle Paul talking about how we need to help and give to people less fortunate than us.

The gifts I really want to talk to you about today are a bit different. We’re not focusing today on gifts between people, but gifts between human beings and God himself. And for those gifts, I would argue that it’s better to be the one receiving the gifts. Sure, we give gifts to God. We use time, talents, and offerings to serve him. But God doesn’t really need our gifts. He’s not up in heaven upset that he missed out on an extra ten bucks in offerings that someone decided not to give. No, the gifts we give to God are really only a small response to his gifts to us.

And especially as we look at Christmas, and the celebration of Jesus’ birth, we don’t focus on what we’re doing for God; we focus on what he has done for us in his Son. This Christmas — really for all time — the most important gift is the gift that God gives. And all of us get to celebrate that. Because the gift it yours. END_OF_DOCUMENT_TOKEN_TO_BE_REPLACED

There are many of you in this congregation who think to yourselves: ‘If only I had been there! How quick I would have been to help the Baby! I would have washed his linen. How happy I would have been to go with the shepherds to see the Lord lying in the manger!’ Yes, you would! You say that because you know how great Christ is, but if you had been there at that time you would have done no better than the people of Bethlehem. Childish and silly thoughts are these! Why don’t you do it now? You have Christ in your neighbour. You ought to serve him, for what you do to your neighbour in need you do to the Lord Christ himself.

Though I’m not a fan of what I’d call “Christian Contemporary Music” for the most part (as I’ve mentioned before), there’s some good stuff out there. Particularly good is Koiné, a band in the WELS that takes classic hymns and performs updated versions of them. 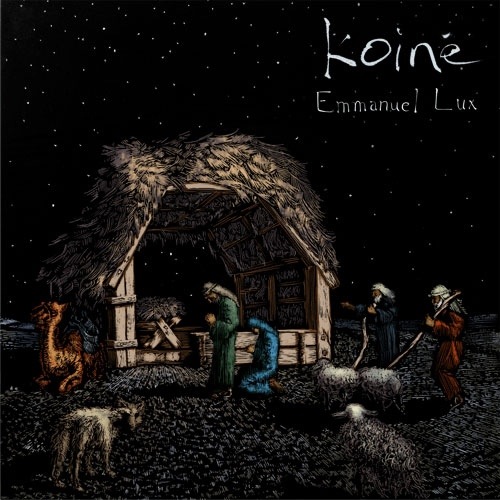 Their newest album, Emmanuel Lux has been the soundtrack of our house the past week or so. I think Koiné really stepped it up a notch with this one. The whole album works together, rather than just being a collection of songs.

You can check out this album from Koiné’s site here. Unlike their other albums, this one’s not available yet on Spotify. Besides the band’s site, you can also find it on iTunes.

Oh, if you’re ever in the mood for some really different Christmas music, you could always check out Sufjan Stevens’s two Christmas box sets, “Songs for Christmas” and “Silver and Gold.” These aren’t for everyone, but the music ranges from reverent folk takes on traditional Christmas songs to bizarre, electric originals like “Christmas Unicorn.”

Again, he’s not for everyone, but worth checking out if you don’t want the same old Christmas music. His stuff is available on Spotify or you can stream most of it from his site, too.

As For Me and My House, a photo by pastorwalters on Flickr.

This is my favorite wall in our home. It’s a cast iron cross that my parents had given us as a gift a few years ago.

I guess it’s especially meaningful to me tonight as I think about Christmas coming up and the sermon that I just preached.

Oh, the words are some sort of wall sticker-thing that my wife found somewhere, I think at Hobby Lobby.

We don’t usually like having bad news mixed in with our good news. One of the board games my children like to play is Chutes and Ladders. You might’ve played it before, too. Usually, taking this game out is greeted by cheers from my kids. They like games and they think it’s good news to play it. But anyone who has played a game like this with little kids know there’s the possibility of bad news, too.

You see, as you advance in Chutes and Ladders, you win the game by getting to the end first. But on the way there, there are ladders, which let you get closer to the end faster, and there are chutes, which send you down away from the goal. Well, as you can imagine, little kids (and adults) don’t really like the bad news of landing on a chute and going backwards. More than one child has shed a few tears over the years at landing on a chute, especially the biggest chute that’s so close to the goal.

That chute used to be bigger. On older versions of the game, the chute right near the goal would take you almost to the bottom of the board. It doesn’t go as far now. That’s how much people didn’t like the bad news of that chute.

Other things have changed a bit to try to avoid bad news. Do you all know the common bedtime prayer that many young people say every night? “Now I lay me down to sleep, I pray the Lord my soul to keep…” Now the original version that I grew up with ends, “If I die before I wake, I pray the Lord my soul to take.” Now, that’s a pretty harsh prayer that contains the “bad news” that we’re going to die someday, possibly even tonight! So there’s another, newer version of the prayer that ends, “the angels watch me through the night until I wake in morning light.” Now there’s nothing wrong with that ending, but notice how it avoids mentioning death or anything that could be considered bad.

Does that mean we should avoid a text like our sermon text for tonight. After all, there’s plenty of potential for bad news here. But he was pierced for our transgressions, he was crushed for our iniquities; the punishment that brought us peace was upon him, and by his wounds we are healed. (Is. 53:5)

This text, though written hundreds of years before Jesus was born, takes us right to Jesus on the cross. It’s filled with things that are kind of hard to look at, that could be thought of us bad news. He was “pierced”, he was “crushed”, he had a “punishment” and a lot of “wounds.” This is not pretty stuff. END_OF_DOCUMENT_TOKEN_TO_BE_REPLACED

Christmas blessings to all reading this! Christ is born! God has come to save his people!

Ok, I realize there are only so many cutesy Christmas videos that one can stomach each season. I’ve already shared one, but I have one more for you to watch.

Again, it has it’s cutesy elements, but don’t roll your eyes too much at this video as it presents the Christmas story as if it happened on facebook. Instead, see what this video does well: it shows how the people in the biblical account were real people, and it explores the emotions they were / might have been feeling when these amazing events took place. Plus, the music is a bit better in this video than the last one.

One more time: merry Christmas! To us a child is born!

As we get ready to celebrate Christmas, most of us will be hearing those same stories again. Mary and Joseph travel to Bethlehem. There’s no room for them. Jesus is born and laid in a manger. I even memorized and recited most of the actual Scripture from Luke 2 when I was a kid.

This presents a temptation for us. The Christmas story seems like a kid’s story. It sounds like a fairy tale. So we’re tempted to want to “get beyond” such simple, boring stories and move on to something else.

But no! These stories are so precious, because Christ our Savior is given to us in them! This Martin Luther quote really sums this up well. Read it and take it to heart!

I beg and admonish faithfully all devout Christians that they not be offended or stumble over the simple stories related in the Bible, nor doubt them. However poor they may appear, they are certainly the words, history, and judgments of the high divine Majesty, Power, and Wisdom. For this is the book which makes all wise and clever people fools, and can only be understood by simple people, as Christ says . Therefore let go your own thoughts and feelings and esteem this book as the best and purest treasure, as a mine full of great wealth, which can never be exhausted or sufficiently excavated. thus you will find the divine wisdom which God presents in the Bible in a manner so simple that it damps the pride of clever people and brings it to nothing. In this book you find the swaddling clothes and the manger in which Christ lies, and to which the angel directs the shepherds. Those swaddling clothes are shabby and poor, yet precious is the treasure wrapped in them, for it is Christ.

This video has been posted and reposted to countless places already, but in case you’re one of the few who hasn’t seen it, here you go!

It’s a fun video not meant to be taken too seriously, so keep that in mind.

Two things I can’t resist mentioning though: why did they pick jingle bells as the background music? Is that really the best they could come up with? Also, the “moral” at the end of the video is really lame, I can’t even stomach retyping it here. Let’s just say it’s not really what Christmas is about!